Here are some of the family pictures. Click on a picture for an enlargement and use the "back" button of the browser to return to this page.

Throughout our married life we had many pets, but here we concentrate on our cats. 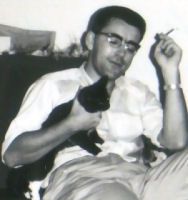 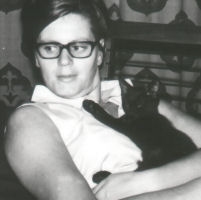 During our stay in Lagos, Nigeria, we initially rented a house in Apapa. There we got a black kitten with a white spot on her breast in early 1970 which we named Pluisje; Dutch for Fluffy.

Unfortunately she disappeared after about one year. Did she ended up in someone's pot, or was she eaten by a snake or a monkey? All we have left of her is a tape recording with my wife talking, the ceiling fan doing a slow swoosh-swoosh-swoosh, and Pluisje meowing in her kitten voice. And then of course these three poor quality black&white snapshots. On the first picture I have my birthday; turning 27 years. The last one was taken on Mother's Day. 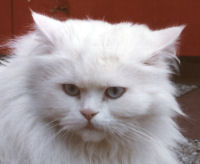 While we lived in Lisse, Netherlands, we went to a cat show where my wife decided to acquire a White Persian cat from a breeder. That cat was named Nazar Boy van Pamage. He had beautiful long white hair and blue eyes, but was not suitable for showing or breeding. He was born 13-Jul-1975 and we bought him Sep-1975. His father was an International Champioen; we still have the pedigree record.
Unfortunately he developed kidney problems, and although he was under medical treatment we found him dead one night when we came home from dance class. The last pictures we have of Nazar Boy were taken on 17-May-1979 at almost 4 years old. 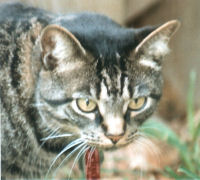 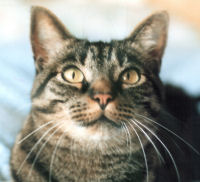 Stranger was a stray domestic cypress tabby. Came to our door in Houston begging for food. I tossed a slice of bread to her outside and she finished that in no time. She kept coming back every day and we kept feeding her. Of course with our two sons around, very soon she was allowed to come inside during the day.
After several months the "winter" started in Houston (ha, ha), and we decided to keep the stray cat. We had her checked and vaccinated by the veterinarian and named her Stranger. The veterinarian estimated that she was born mid 1980 and she came to us mid 1981. She traveled all over the world with us from Houston, Texas, to Lisse, Netherlands, to Durban, South Africa, back to Lisse, and finally to Calgary, Alberta. She recovered from her first stroke, but her personality had changed completely. After the second stroke she could not function anymore and we had to let her sleep in on 15-Jan-1997. 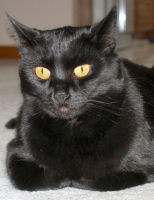 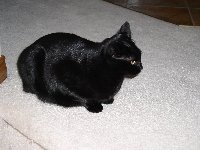 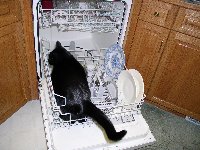 Beauty was black and had a silky shiny fur. When I sat in front of my computer -- reclined like a race car driver -- Beauty jumped on my lap and pumped with her front paws on my belly. She was also the one that ran like a stampeding horse and woke us up in the morning. When we went upstairs from our basement Beauty always beat us to it by racing up on the three inch edge on the outside of the railing. She was always waiting for me to lean back in my recliner so that she could sleep at the end between my legs. She ended up with an inoperable growth under her jaw that prevented her from eating, but she stayed cheerful until the very end. It was a very hard decision, but we had to let her sleep in on 25-Oct-1012. 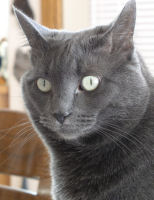 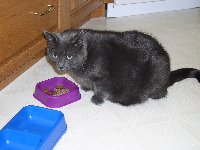 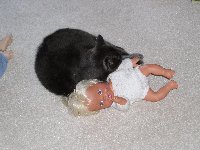 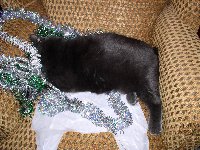 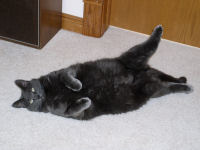 Softie was gray and had a dull thick fur. She seldom ran and hence was fatter. Given a chance she would empty also her sister's food bowl. When she believed she was hungry, she would sit next to the cabinet with the cat food, and when we came closer she would stand on her hind legs while making pawing moves with her front paws to the door handle. Her favorite resting position was with her head on this one doll, and on top of the sofa in the living room. She loved to get brushed anytime of the day. Like her sister, she loved to drink from the running tap of the bathtub. Softie was diagnosed with incurable pancreas problems, but while loosing weight she stayed very energetic and kept catching mice. She survived her sister by 9 days, and died on 3-Nov-2012.

It took us a while to deal with the passing of Beauty and Softie, but in the end we decided to get again two young cats. Although they look alike, they are not sisters. We got them at the Calgary Humane Society on 21-Jan-2013.

The first week we kept them separated, but they could see each other through glass in a door. The second week we let them meet each other for about 6 hours a day under supervision. The first few days there was lots of hissing, growling, screaming and fur, and Sarah went each time into hiding. In the end we found the trick. I would throw little balls on the stairs and those would bounce down the stairs. Fiona ran up and down the stairs chasing the balls. Finally Sarah decided that she liked to join in the fun and within two days they were good buddies. Now they run and play together as if they have known each other for years. 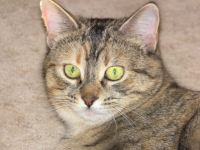 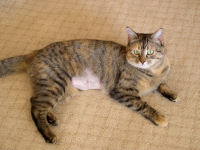 Fiona is a domestic shorthair/mix, and described as brown/orange torbie (spotted). Estimated date of birth is 29-Dec-2011.
Fiona walks with us wherever we go like a well trained dog. She always gives little meows and is always hungry. Walks over us in the middle of the night and especially in the early morning to get our attention. If that does not do the trick then her loud purring will. We are still trying to brush Fiona, but she is no fan of that. One unique behaviour is that she can lay next to the water bowl and dip a paw in the water and then lick it; she does normal drinking too. Fiona is not afraid of anything. The first time she came face to face with the powerhead of our vacuumcleaner (not running) she carefully lifted her paw and gave the powerhead very quick tap. As nothing happened she then tapped it more firmly. 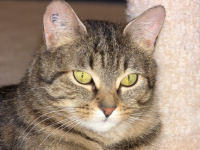 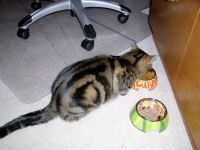 Sarah is a domestic shorthair/mix, and described as brown/black tabby (striped). Estimated date of birth is 15-Jan-2011. Sarah is also a bit smaller than Fiona; she is not as heavily built.
Sarah is more quiet than Fiona. Sarah likes to be brushed, but on her terms, like in the bath tub. She also likes to investigate my wife's dresser loaded with this and that and then some, and things do end up on the floor. I have a 5" stuffed monkey who normally sits on the backrest of my chair in the living room. Sarah took a liking to the monkey and now it travels through the whole house